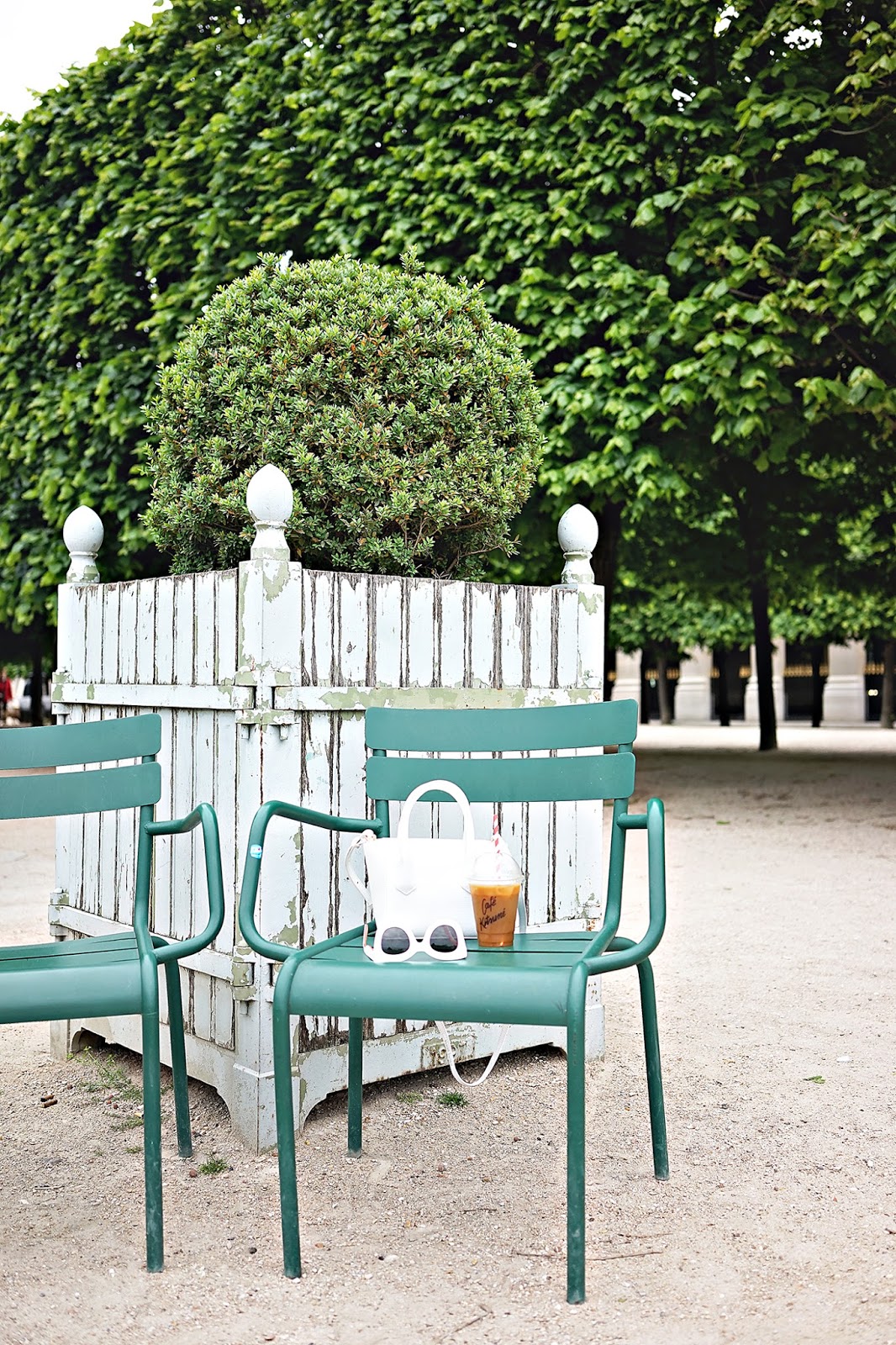 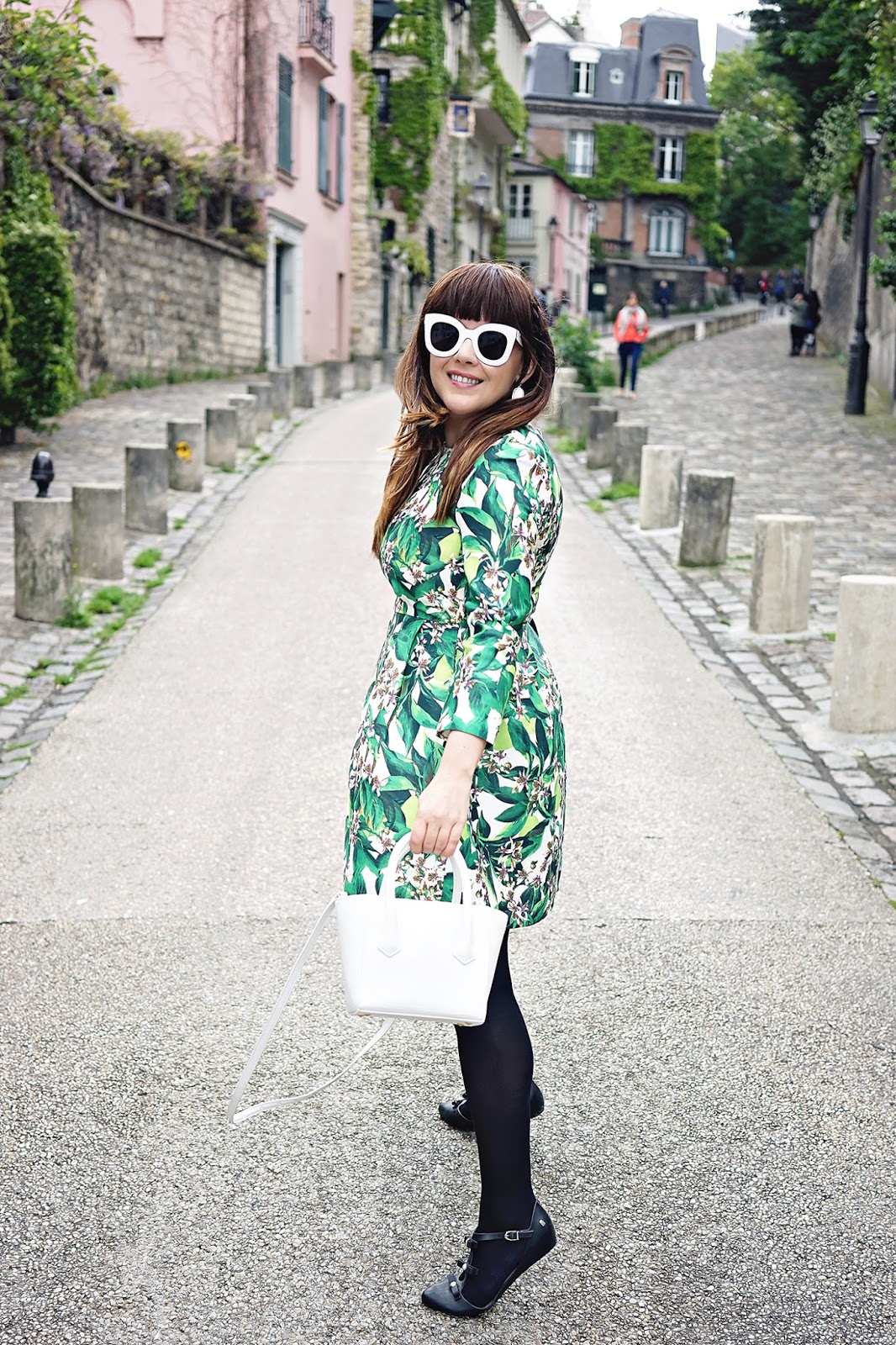 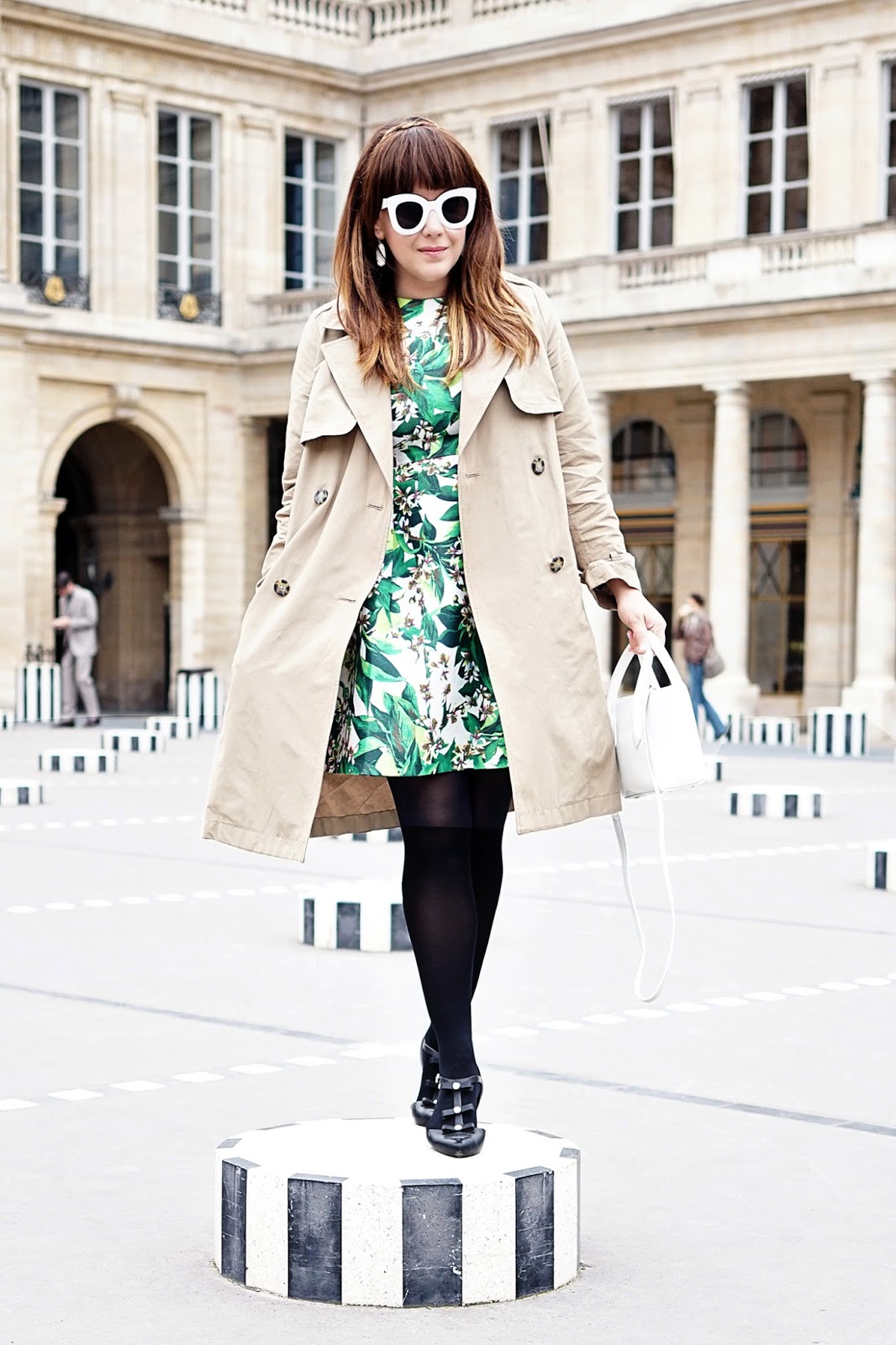 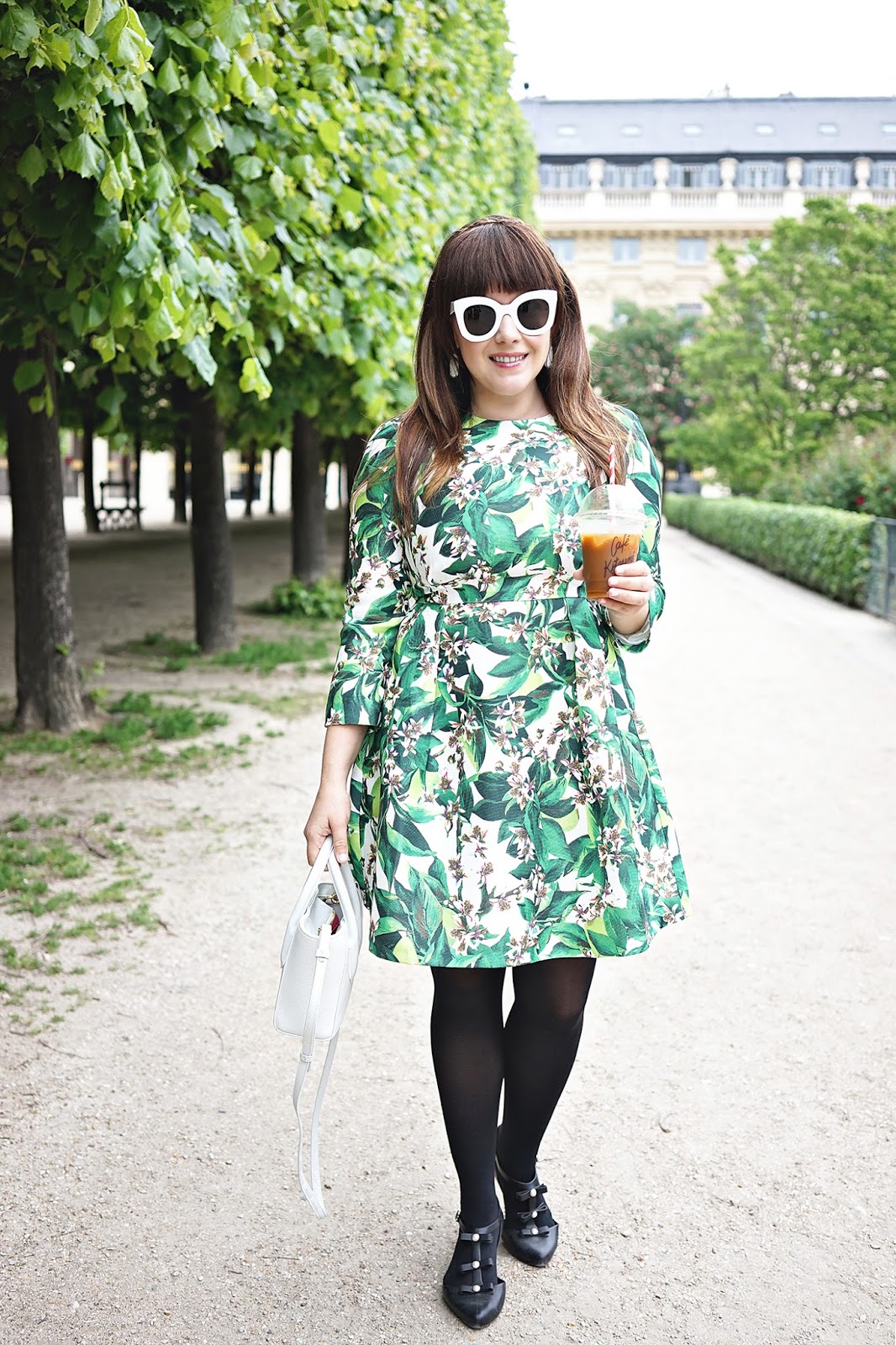 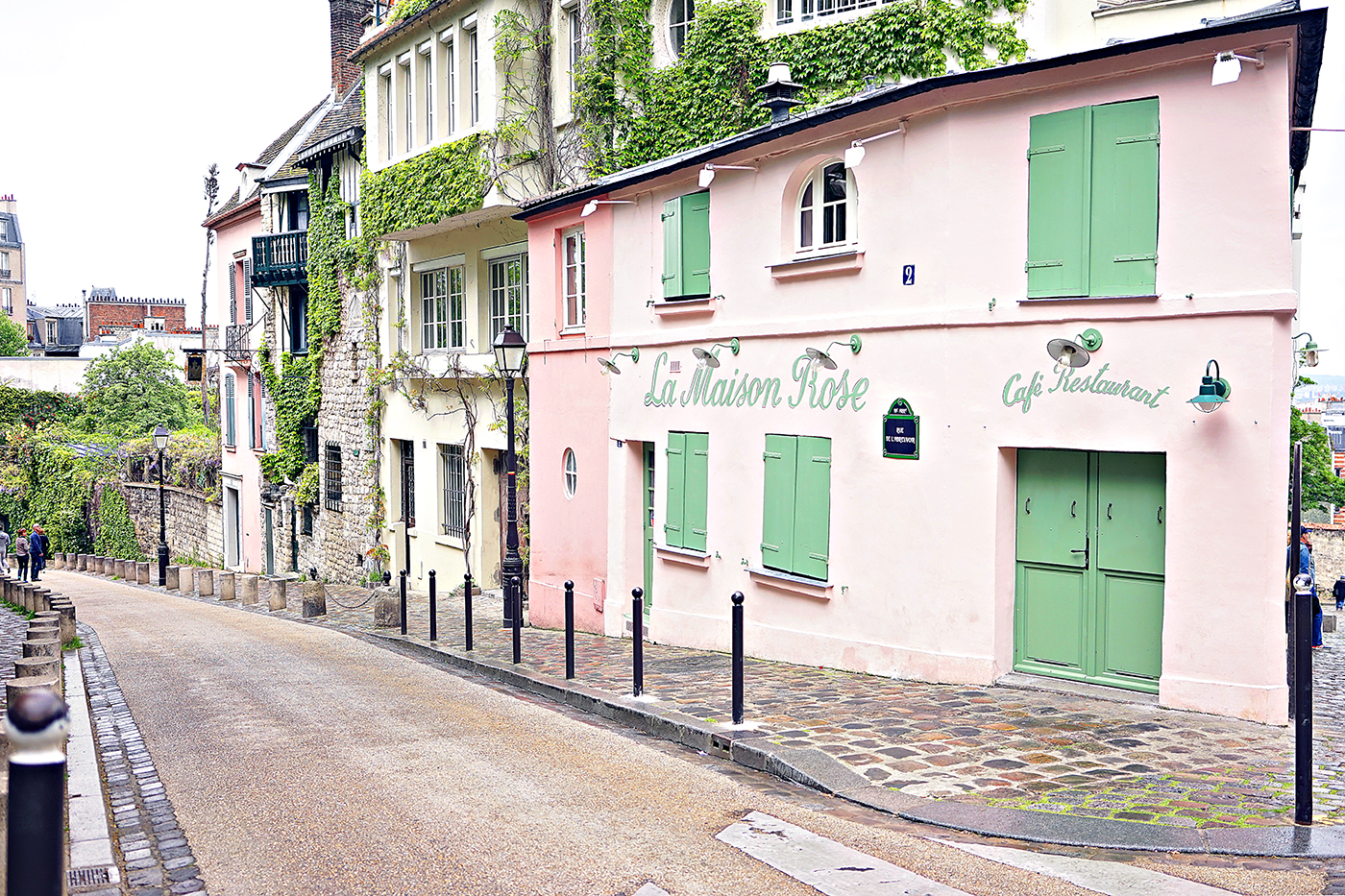 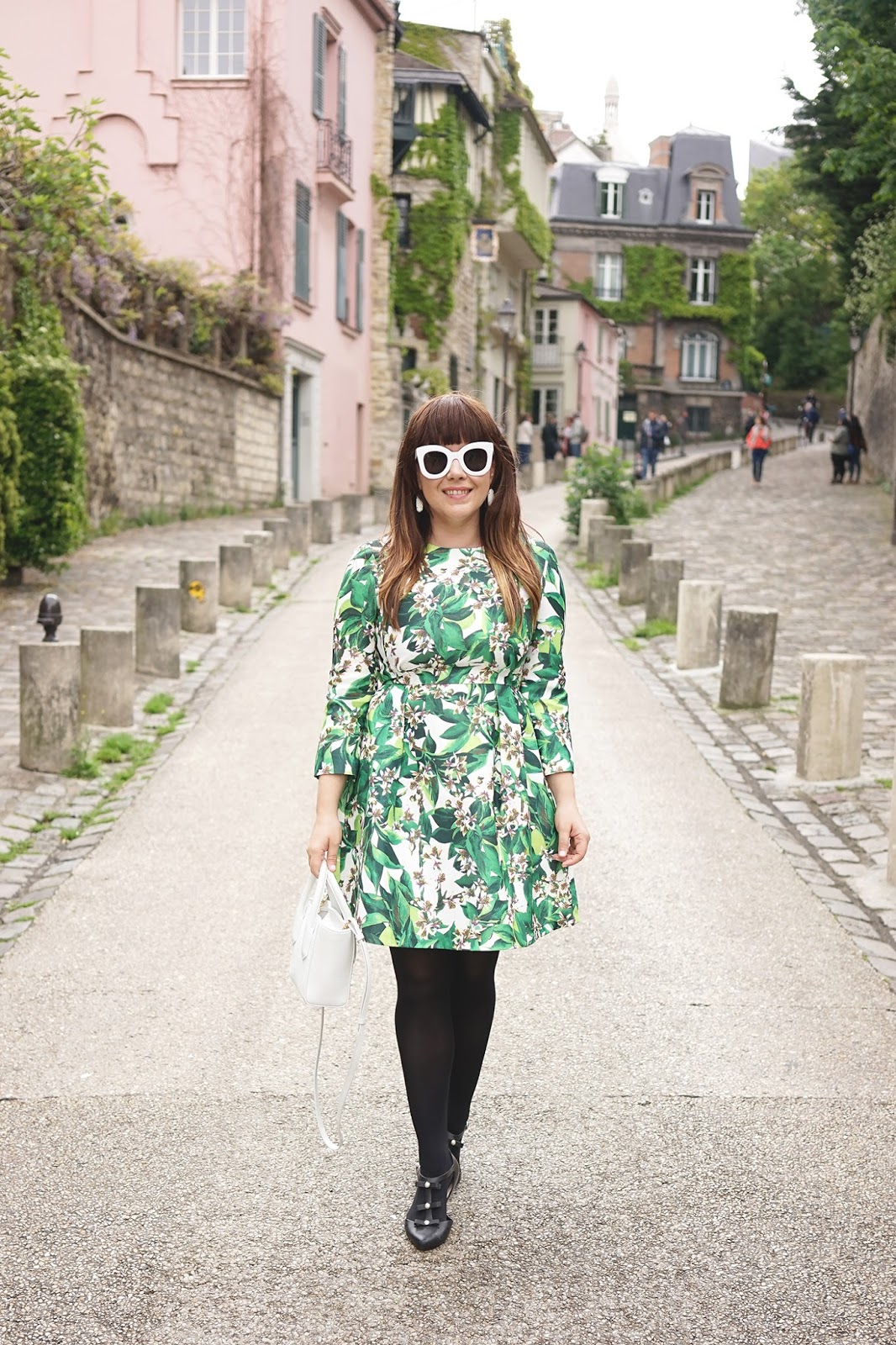 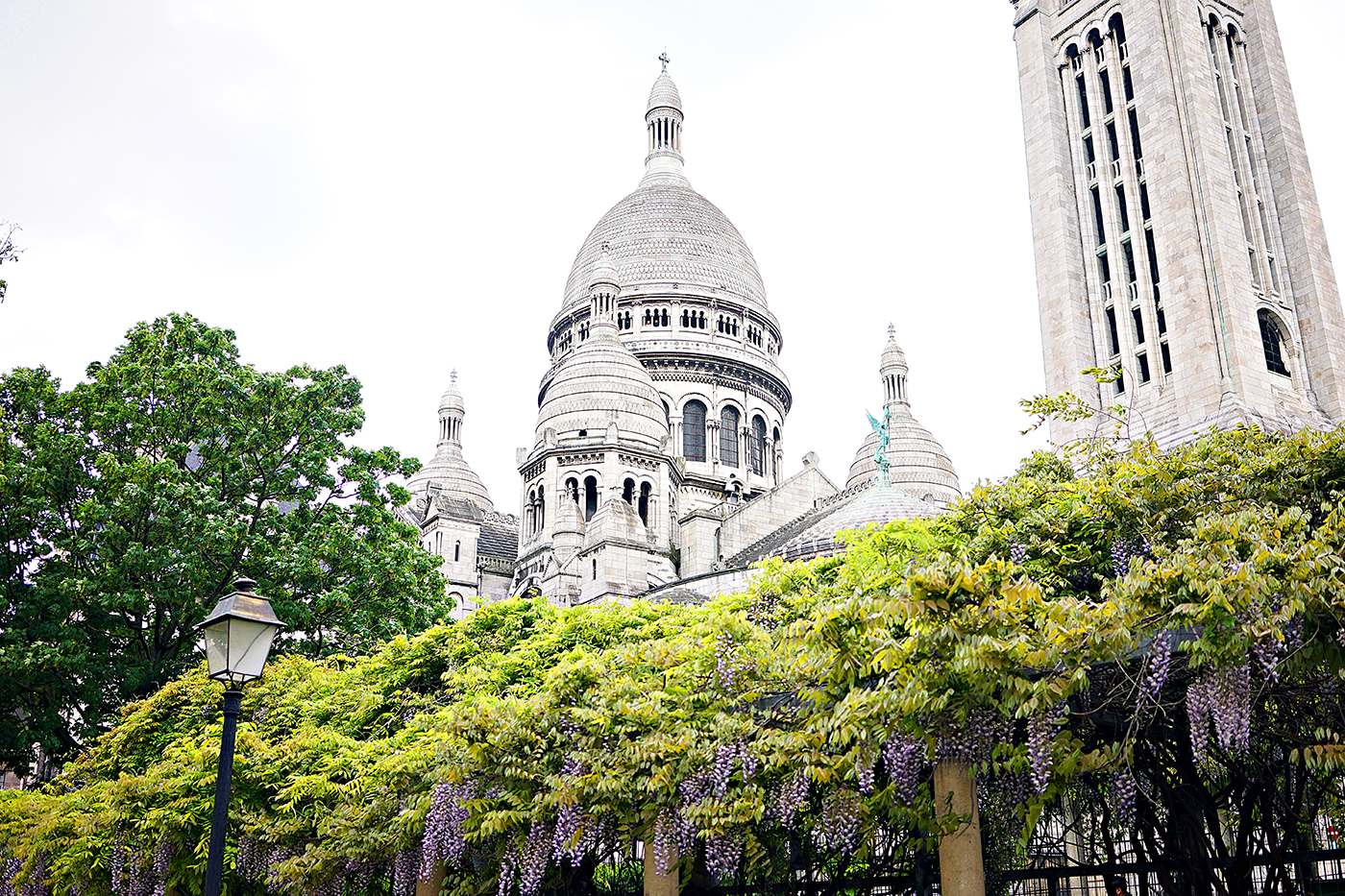 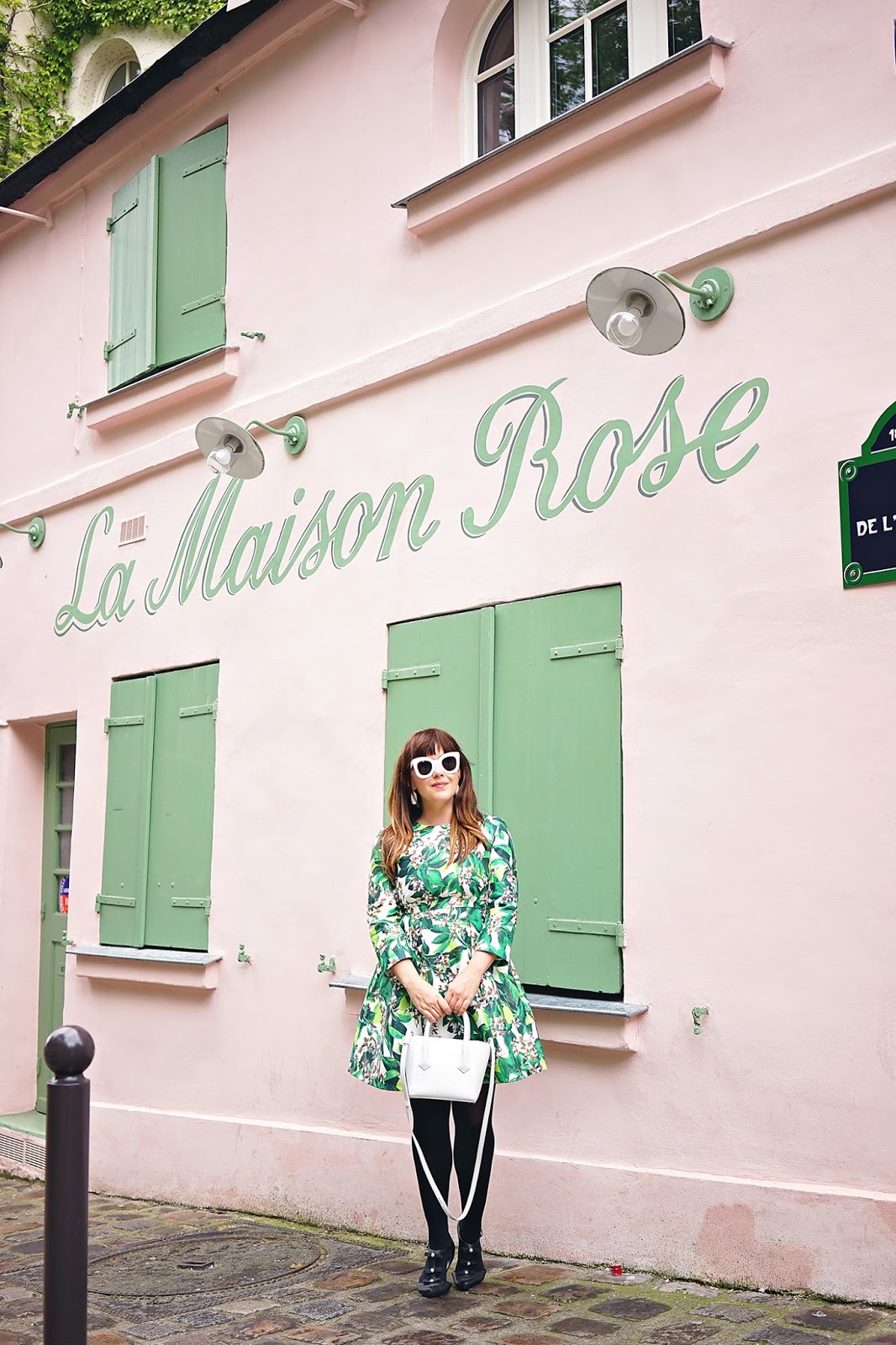 
Springtime might be a bit of an overstatement seeing how it was 36 degrees fahrenheit the morning I arrived in Paris. I didn't exactly pack for such chilly temps, especially since I'll be spending the bulk of my time in warmer Italy, but I did throw a pair of tights into my suitcase at the last minute. Best. Decision. Ever.

Fortunately, as the day/week went on it warmed up considerably and the sun even came out. We had a little bit of rain on my second day in Paris, but I was armed with my tights and favorite cold/wet travel shoes (shh, they are PVC and you can see more of my favorite shoes for travel here).

Despite the temps, I was determined to dress for spring. This gorgeous green dress (last seen here and recently restocked here) seemed perfect for a spring(ish) day in Paris, which began in the Palais Royal and ended with a stroll through Montmartre.

The Palais Royal and its adjoining garden is one of my most favorite spaces in Paris. It is such a beautiful and serene oasis in the heart of Paris. It is also home to my favorite coffee shop Cafè Kitsune (which is actually a Japanese brand/company). After a delightful morning, I met up with Kelly and her family for brunch at Ladurèe before heading up to explore Montmartre.

After the Marais, Montmartre is my favorite neighborhood in Paris. And, fun fact, it was the home of Anna Maria Luisa's (the woman at the center of my research) mother, Marguerite Louise d'Orlean. Ok, brace yourself for a little history fun:

Marguerite (who was cousin to Louis XIV) was married to Cosimo III, the Grand Duke of Tuscany. The marriage, however, was less than happy. Marguerite was madly in love with her other cousin Prince Charles of Lorraine, who she had to leave behind in France to marry the Tuscan Grand Duke. Marguerite never warmed to Cosimo III or Florence, but she did have three children including Anna Maria Luisa.

Having fulfilled her duty to produce heirs, Marguerite pleaded with Cosimo and her cousin Louis XIV to be allowed to return to court at Versailles. Eventually after years of pleading and misbehaving she was allowed to return to France. As punishment, however, Louis XIV forbade her from returning to Versailles. Instead she was forced to reside in, and was never allowed to step foot outside of, the convent of Saint-Pierre de Montmartre. This church and convent, which dates from the 12th century still stands beside the more famous Sacrè-Cœur. Not one to adhere to such personal restrictions, Marguerite constantly snuck out to return to court where she enjoyed high-stakes gambling. Marguerite's ability to get out of her arranged marriage and return to her native country was unprecedented at the time.

Hope you enjoyed a little springtime in Paris with a side of history!